Game Objective:
All American Poker is played against the machine.  The objective of the game is to obtain a five-card poker hand that contains at least a pair of Jacks or better, to the maximum of a Royal Flush.

All American Poker plays the exact same as Jacks or Better.  The only difference between the two games is the values on the pay table.

How to Play:
Bets are placed by selecting the 'CHOOSE COIN'.  Pressing this button will cycle through possible wager amounts.  The minimum wager is $0.1 USD and the maximum wager is $5 USD, the player is able to bet their wager up to 5 times.

PAYTABLE - The machine pays out as per the 'PAYTABLE', which is shown by pressing the pay table button.  The prizes shown in the PAYTABLE are in coins and each column corresponds to the number of coins bet (one coin to five coins).  The total win amount is the number of coins won multiplied by the coin value. The total win amount is shown in the 'WIN' box.

Your game balance is shown in the top right-hand corner of the game screen, under the title.

The default bet for the next game is the same as the amount you bet in the previous one.  You can choose to increase or decrease your bet as you wish. 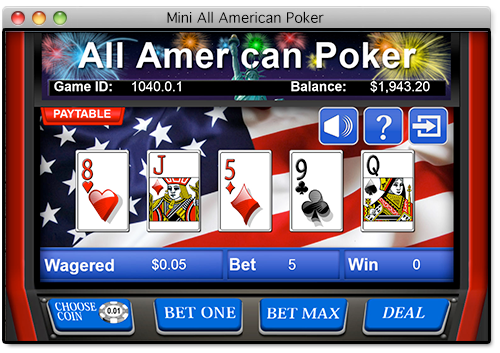